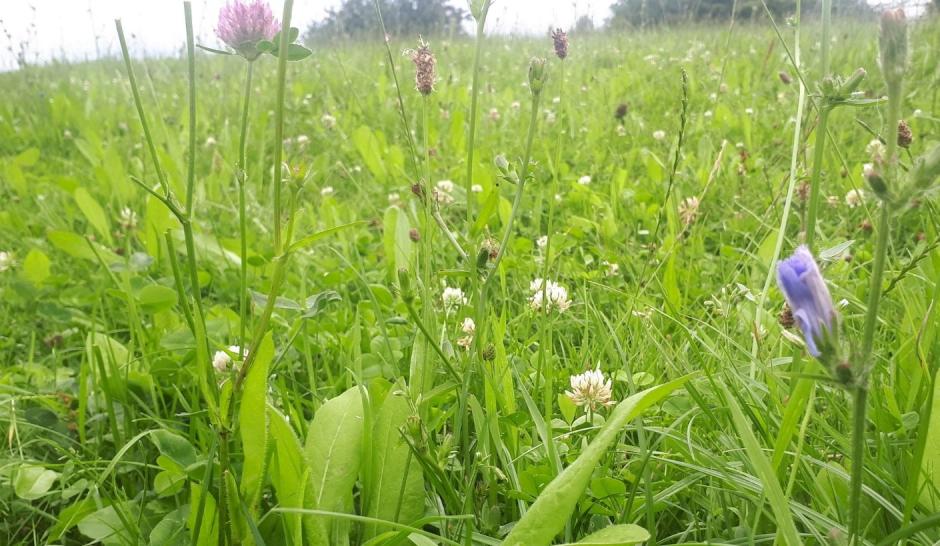 After a slow start, it appears spring has finally arrived with an increase in temperatures and those familiar frequent showers – ideal sowing and growing conditions!

At the DLF trial site, the team are busy evaluating the thousands of perennial ryegrass plots in the hope of finding the next Bowie, Nashota or Xenon. Diversity seems to be the theme of 2021 so far, and at our trial site in County Waterford, we have a host of trials looking at maize, red and white clover, lucerne and multi-species swards.

By far, the biggest story of 2021 is the overwhelming interest from farmers in multi-species swards following the DLF Multi-Species Sward Focus Week in January. Following the recent publication of very positive results from several Irish research institutions, farmers across Ireland are looking to harness the benefits these swards can bring for themselves.

By sowing a diverse sward mixture like DLF’s 6 Species Herbal Ley or DLF 14 Species Mix, farmers can expect to produce the same amount of forage as a grass sward while using significantly less N fertiliser.

Furthermore, these swards are highly palatable, high in protein and minerals as well as being good for soil health and biodiversity. Farmers are reporting excellent growth so far this year from multi-species swards sown last autumn despite the unusually cold, dry spring where many grass swards have struggled.

For more information on multi species swards, see the dedicated page on our website Managing a Multi-Species Sward (dlfseeds.ie).

New maize plots with 46 varieties were sown at the end of April to assess yield, quality, and durability in the field, both under plastic and in the open.

Big changes are coming for maize growers, with a ban on the traditional oxo-degradable plastic film from 2022. At the moment, it looks like the new biodegradable film will cost significantly more than the old film and may lead to increased costs of production. As a result, we have seen a significant increase in the area of open sown maize across the country.

Sowing maize without the insurance policy of plastic film to help germination may seem like a big risk for growers. However, significant developments in maize breeding over the last 20 years mean germination rate, yield and quality of open maize varieties has vastly improved.

For example, DM yield and starch content have increased by 20 and 24%, respectively, since 2004. When sown in suitable conditions open varieties like Resolute, Trooper and Exelon can produce excellent yields of quality forage without the need for plastic film.

The significance of the grazing utilisation trait to the PPI index

This year sees the addition of a grazing utilisation trait to the PPI index. DLF varieties Xenon and Aspect were two of only three varieties to receive a 5-star rating for their grazing performance. The PPI trait is calculated using results from the ongoing variety grazing trials at Teagasc Moorepark, where the DAFM Recommended List varieties are assessed on their performance under real-life grazing conditions.

The grazing utilisation trait is based on the principle that cows will graze their favourite varieties down to a lower residual height, thus utilising more grass grown. Yes, increasing the number of tonnes of DM grown increases profitability, but only if the animal actually eats the grass! This is the grazing utilisation score. This is an extremely useful addition to the PPI Index and will be vital in assisting Irish farmers to choose the highest quality grass varieties for their farm.

DLF started their Grass Partner Research Programme four years ago to evaluate varieties at the farm level. Taking the lead from the Teagasc trials, DLF established its own variety grazing trial to assess the in-field performance of the latest DLF varieties and compare them to some of the popular varieties currently on the market.

Across four of our Partner Farms, we have sown 21 varieties in plots 3 x 7m plots in a paddock that will be grazed as part of each farms grazing rotation. This will give us a much clearer picture of how the new varieties perform under actual grazing. Although we are only three rotations into the grazing season, the trial is throwing up some exciting results so far!

Follow our social media channels for updates throughout the year.